Check out this Buzzfeed post for great ideas on how to spoil your mom on Mother’s Day! And if you’re not living at home, don’t forget to call your mom tomorrow. Even the simple act of calling will brighten her day!

As I mentioned in my post on Sunday about my cocktail, the Breslin has become one of our favorite brunch spots. There are TONS of brunch restaurants throughout the city that offer unlimited cocktails when you buy a meal aka bottomless brunch. This, unfortunately, is not one of them but the fact that we keep going back should be a testament to how amazing the food is. The have an untraditional traditional menu. Essentially, all the brunch favorites with a delicious twist. I have had everything from the pancakes to the lamb burger to the full English breakfast. I have never been disappointed.

This time we visited with some of Nick’s colleagues to celebrate his friend Eleanor’s birthday. Here’s a peak at some of the things we ordered:

The caesar salad is the best I have ever had. A chef I worked with at Eataly first told me about it and he was not lying!

My Lamb Burger with trice cooked fries (they didn’t last long enough for me to get a picture!)

The next stop in our Sunday Funday was a place in Inwood that I have been wanting to check out. I live in Washington Heights– a place that most people outside of NYC have never heard of and a place where New Yorkers ask “Really?”. I have lived here for almost 3 years and I love it. It doesn’t have a great reputation because before 10 years ago it was extremely dangerous with one of the highest crimes rates in the city. Like most of New York, though, it is changing. I have seen the beginning of gentrification before my eyes and it’s an exciting thing to be a part of. Inwood is even further uptown!

La Marina has been open for years but recently switched ownership and underwent a major make over. It is a lot like the 79th Street Boat Basin but less fratty and it has better views! I read tons of reviews before visiting and I didn’t have high expectations at all. I must say, it surprised me! I was very impressed with the crowd, the views, the food and the drinks. 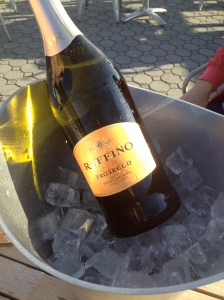 Bottle of bubbly to start of the experience

The sun started to set and it started to get cold so we decided to head home. Lauren headed back to her place (she recently moved to Washington Heights because she loved it up here so much!) and Nick, his friend and I headed downtown. Nick and I follow the New York Times restaurant reviews and a few weeks ago Pete Wells reviewed a Filipino restaurant in the East Village called Jeepney. Nick visited a good friend of ours in the Philippines a year and a half ago so he has been wanting to check this place out. Although we had already eaten a TON we decided to head downtown and give it a try! 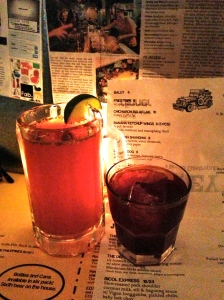 I let Nick do all the ordering because he was more familiar with the food. We decided to order some hot Banana Ketchup Wings and Balut to start.

The wings were spicy and delicious and the balut was scary (ha!). Balut is essentially a hard boiled egg that is made by boiling a duck egg with a semi-developed embryo inside (usually around 17 days old). It’s a bizarre food but I had to try it. Nick ordered one for himself and I decided to steal a bite of his instead of jumping in head first and ordering my own.

Cracking it open from the top

About to try my first bite. It wasn’t nearly as bad as I thought it would be- just not sure I would order it again!

Next up was the Bicol and Pancit Malabok Negra. I preferred the Bicol but everything was amazing! The Bicol is slow-roasted pork shoulder with coconut milk, sili (chili), bagoong sauce (Filipino fish sauce), vigan longganisa (pork sausage), pickled chili and baby bok choy. 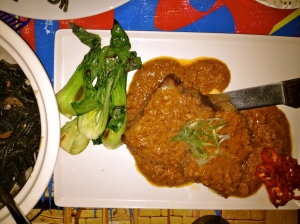 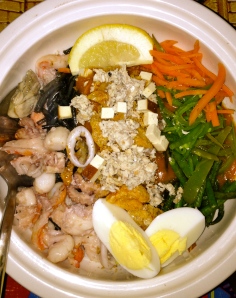 I was so full by the end but we ended up ordering a traditional Filipino dessert to finish off our day of over eating. Nick got us Halo Halo which reminded me of a traditional Vietnamese dessert we used to eat all the time called Che.

All in all it was a great day! Maybe my next Sunday Funday will be a little healthier…