Nick and I went to Lattanzi on Sunday night (yes, after eating everything at the BK Flea!). To be honest, I didn’t have high hopes but I went in hoping for the best. Lattanzi is located on 46th St between 8th Ave and 9th Ave which is known as “Restaurant Row.” There are a few great restaurants but most of them are geared towards the pre-theater crowd and the emphasis tends to fall on getting people out of the door instead of on the food.

Nick had a gift card that he received for his 24th birthday so we figured we’d give it a try. We started with cocktails – Old Fashioned for him and a dirty Hendricks martini for me- and then ordered a bottle of Valpolicella Ripasso for the meal. The drinks were great!

Everything I read about the restaurant said I had to try the artichoke appetizer. So we did. 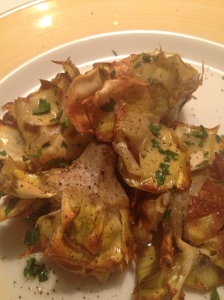 I will say, the artichokes were good. Not amazingly amazing but solid. I would order them again. Next up we had the beef carpacio appetizer and, again, good but not amazing. The portion was perfect (which means I secretly wanted one more bite but knew I was at a good place in the meal).

I was kind of excited at this point because everything so far was enjoyable. Next up was bucatini. I love bucatini so, again, I was excited. The first thing that threw me off when the pasta came to the table was that the pasta was stuck together and under cooked. I can appreciate al dente pasta but this was under cooked- crunchy almost. Once I got past the really undercooked pieces of pasta, the dish was really good. I would go back and give the pasta another chance to blow me away.

We ordered  Orata, which is usually one of my favorite fish to eat (I even wrote a post about making orata at home in my old blog!) The fish was inedible. I took one bite and it was over cooked beyond belief. It was what we called “hammered” in the restaurant industry. I was so sad!

All in all the meal was good. The ambiance is romantic and old school (in the best way possible). The service was attentive but not instrustive. The only thing that really threw me off were the prices. If the orata had cost $16-$18, which is what it should have cost for how it was prepared, I would have been ok with everything. The fish was $26 which is comparable to Esca. I guess I made the mistake of ordering fish. I’m sure pork or beef would have been better.

We decided to skip dessert at Lattanzi and head over to Esca for dessert. We went for the chocolate, mascarpone cheesecake. It was so delicious. The desserts at Esca never disappoint! 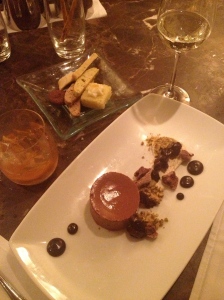