Two posts in one day! I wanted to try this recipe out a few times before posting but here it is: the best crispy pizza dough recipe! I have been making my own pizza dough for a while but I could never get the flour/water ratio right. Like most recipes I develop, I also research at least 5-7 recipes online before grabbing my favorite ideas from each and putting them together.

I was working on putting some ideas together about two weeks ago when I stumbled upon this recipe from Bon Appetit. I decided to just go for it and see how it turned out. I altered it only slightly (used my hands to mix instead of a processor). It was PERFECT! I rolled it out as thinly as possible and it is perfectly crispy and crunchy.

Mix 2 cups flour, sugar, and salt in a large bowl.

Add yeast mixture and 3 tablespoons oil to dry ingredients and mix (using your hands is easiest) until the dough is stringy.

Transfer to lightly floured surface and knead dough until smooth, adding more flour by tablespoonfuls if dough is very sticky, about 5 minutes (the original recipe calls for one minute but I found it worked well by kneading it a little longer because I didn’t use a processor to mix it).

Transfer to a lightly oiled bowl; turn dough in bowl to coat with oil.

Cover bowl with plastic wrap and let dough rise in warm draft-free area until doubled in volume, about 1 hour.

Punch down dough, roll into a large ball and then divide into 4 equal-sized dough balls.

Wrap each dough ball in plastic wrap (or, better yet, an air-tight container) and refrigerate for up to 4 days before using (you can freeze the dough balls for up to a month as well- just be careful of freezer burn- and let it thaw in the fridge for at least 24 hours before using).

Hi all! I know it’s been a while since I posted… again. So here’s a quick post about my new favorite salad dressing!

Whenever I visit my family in Maine, I have to make a visit to my favorite restaurant Huot’s. We have known the owner, Denise, and her family since I was young and Huot’s is a part of all my Maine memories. When I was younger, I would go for fried haddock sandwich with french fries but now that I’m more health-conscious I order the clamcake and a house salad with poppyseed dressing. Before Huot’s, I didn’t even know poppyseed dressing existed so I was surprised to I find it on Westside Markets shelves a few weeks ago.

The Brianna’s poppyseed dressing is now a staple in my refrigerator and I find myself using it on all kinds of salads and vegetables. It is great on a simple salad with some cut up fruit, such as strawberries or grapes, or even on top of avocado or peaches on its own. I find myself looking for reasons to use that and for $3.99 a bottle it’s a pretty hard deal to beat!

I have always said that everyone needs to work in a restaurant at one point in their life. Working in the industry is hard. Actually, hard is an understatement. When days are good, they are the best days you’ve ever had. When they are bad, you’re in a walk-in somewhere bawling your eyes out while trying to pull yourself together so guests can’t tell you’ve been crying.

I remember when I wanted to get my first job. I marched my way to the principal’s office at my high school to get a worker’s permit signed when I was 15. I wanted to work at the mall so I could spend all my money on clothes. However, my dad refused to let me go into retail because “restaurant’s have more money.” Both him and my mom worked in the industry until their mid-twenties and actually met while my dad was her supervisor at a bar- I guess it runs in my blood. I feel like I owe so much to my dad because I have learned more about myself through working as a busser, food runner and server than I think I could have ever learned folding shirts at Tyson’s Corner.* I am a sensitive person and every day of my 10-year career has made me stronger and molded me into the person I am today.

I am no longer working in a traditional restaurant setting but I am still in the service industry as an event server. I am still at Haven’s Kitchen once or twice a week and I am so happy to be there. I believe in the mission and it’s an enjoyable place to be and a lot of that has to do with my co-workers and the people we serve. The owner, Alison Cayne, wrote an article that was published on the Huffington Post’s website yesterday that everyone needs to check out. She was able to articulate my exact thoughts on why everyone needs to work in a restaurant at one time in their life. Here’s a quick overview of the 10 things you learn as a server but you can check out the full article here!

*Disclaimer: I have several friends that work in retail (Bloomingdale’s, Lucky, Burberry, etc.) and I by no means want to disregard how hard it is. I don’t actually know first hand but, from their stories, I know customers can be just as difficult.

I feel like I have been apologizing in almost every post this summer. I have been so bad about posting and so much of it has to do with the fact that I have been traveling a ton and it has been just too hot to cook. I’m not sure if everyone is like me but when it’s hot outside I just don’t want to eat (no eating = no cooking = no posts). That said, I have three posts that will be going up over the next few days that are all about my favorite culinary adventures in Spain!

We flew in and out of Madrid so we spent our first 48 hours in Spain trying to cram in as much food as possible in the country’s capital. We had a night in Madrid on the tail end of the trip but we didn’t know how much energy we’d have left after two weeks on the road so we wanted to hit everyone our first time around. We landed at Barajas airport around 7am and were at our rented apartment by 11am. By the way, if you travel often and have never tried Airbnb, you have to try it- by far the easiest, most inexpensive and convenient way to handle accommodations on the road. We essentially dropped everything in the apartment and wandered out into the streets with our guide book and a map I bought at Barnes and Noble back in New York.

Our apartment was located on Cuesta de Santo Domingo, which, for those of you who haven’t been, is right in the heart of Madrid. To give a little perspective for those of you have been, we were less than 5 minutes walking from Opera, Callao, Gran Via, Santo Domingo and SOL metro stops and Plaza Major. We were starving so we headed straight for Mercado de San Miguel which had been recommended to us by multiple friends and our guide book.

View from outside before walking in

View inside down one of the aisle

No clue what this is. But there was so much amazing seafood! 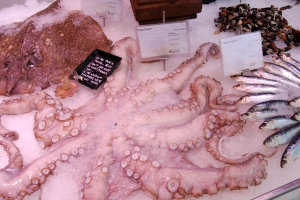 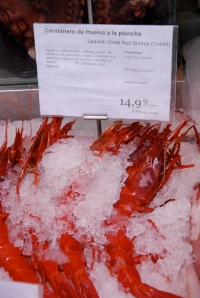 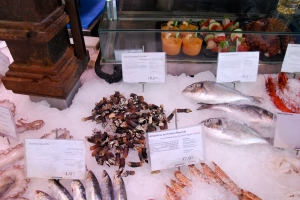 Oysters- our first culinary stop in the market 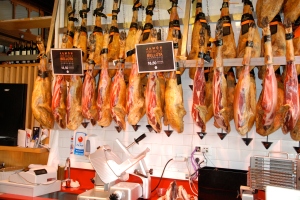 Mercado de San Miguel was a perfect first stop. You can bounce from counter to counter and eat everything from oysters to pinxtos to bite-sized desserts to paella. Literally anything you could imagine! We did realize, perhaps a bit too late, that everything adds up quickly. Every stall was better than the one before so we just kept eating. Nothing cost more than €6-€9… but six or seven stalls later… oops?

After leaving, we just started walking. Whenever I travel, I like to do a ton of research (sorry to all my friends for all the emails!) and study a map so I can have a general idea of how to “aimlessly” wander around while still hitting every place I was told to check out. My mom (and others) had told me all about Botin. Botin, which opened in 1725, is considered to be the oldest continuously running restaurant in the world and it is located just down the street from Mercado de San Miguel. We “happened” to walk right by it so we stepped in and made a reservation for later that night. After a quick siesta we headed to dinner!

Botin- The Oldest Restaurant in the World 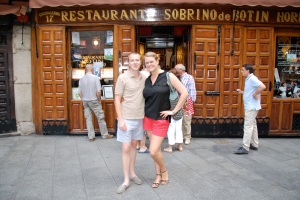 Us in front of Botin 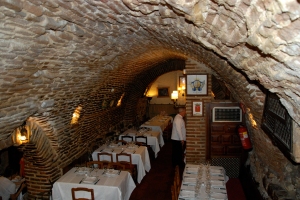 Walking down the stairs into the cellar 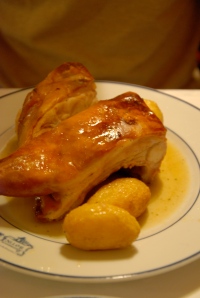 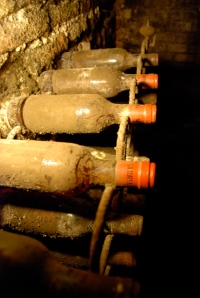 A friend of mine from college, who moved to Madrid after we graduated to get a masters degree, told us to check out a Museo de Jamon. They are located all over the city and they make a perfect pit stop before siesta to get a quick snack and a beer. They sell small draft beer- maybe 6 oz at most- and you get free jamon and/or cheese when you order! It’s cheap, quick, delicious and the perfect bite. 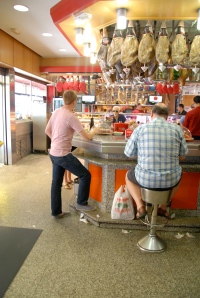 Nick at the counter ordering our beer (and free food)

Our first small beer and our free snack. When you’re thirsty, these beers go down in a gulp or two! 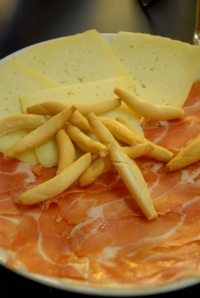 Another snack from our second round of beers

Our second night (and first of two “last” nights) in Madrid we decided to do a proper tapas crawl on Cava Bajas,- Madrid’s notorious tapas street. We had a few recommendations and our trusted Lonely Planet so we just headed down the road. Our two favorite stops were Almendro 13 and Posado del Dragon (which happened to be the hotel we had booked for our final night of the trip before flying home). We fell in love with Huevos Rotos and Patatas Bravas! 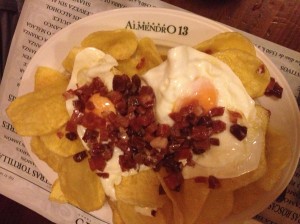 We ended our tapas crawl at a little churro restaurant called San Gines near Plaza Major around 2:30am. We ordered 4 churros (the standard order) with hot chocolate. It was so good! If you are ever in Madrid, you definitely need to check out all of these spots. I know that if I ever find my way back to Spain, you will find me wandering between Opera and Cava Bajas finding every treat in between. 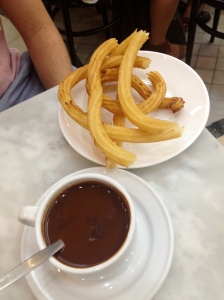 I know I have been horrible with the blog recently- I apologize. Every fall I get inspired by all things apples and pumpkins so I expect there to be a flood of posts in the weeks to come.

In the meantime, check out this post from Buzzfeed! They always have such amazing and inspirational ideas!